Are You Overlooking Under-Performance in Your KPIs for Nonprofits?

This is the second blog in our series exploring outcome KPIs for nonprofits. In our previous article, we wrote about how today’s nonprofits need to track the outputs and outcomes of their efforts – the actual impact of their mission in action. Why? To build and maintain the confidence of funding sources that expect transparency and accountability like never before.

Before we address how to measure and track nonprofit outcomes in later posts, we need to debunk a common myth: That most nonprofits understand their performance already. Rather, most organizations make some attempt to understand it but come up shorter than they realize.

The Wrong KPIs for Nonprofits Can Mask Under Performance

Take a church, for example. It seems natural to measure performance based on the weekly attendance or the level of donations. But churches don’t just aspire to fill seats or raise money – they have loftier ambitions to change lives in deep, meaningful ways. Just because a church packs the pews on a Sunday doesn’t mean it reaches everyone in the audience. Most other nonprofits have this same problem: where the appearance of success obscures the actual performance. 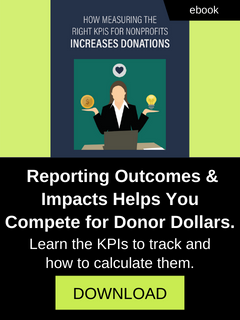 Why does this happen? Blame the way we analyze information. We claim to interpret the facts objectively and consistently, but human bias still creeps in – especially when it comes to identifying and quantifying our own successes...or lack thereof.

How We Reach the Wrong Conclusion

When nonprofits overestimate their success or overlook their shortcomings, it’s usually because of three common causes. Do these look familiar?

Time for an Honest Assessment

It’s time to replace assumptions about nonprofit performance with hard data. Only once a nonprofit knows what its impact really looks like can it set about expanding and improving on things. AcctTwo can help you make that assessment. Contact us for a fresh perspective on performance.