How a Mission Uses Sage Intacct Nonprofit to Increase Visibility

In 1972, Sharon Johnson went to Haiti to direct a choir that was traveling around the country. As she looked into the faces in the crowds, she fell in love with the people of Haiti. She returned each year with her husband, Bob, and over time, they felt the need to provide the people of Haiti with help every day and not just once or twice a year. In 1983 they formed what is today Mission of Hope: Haiti (MOH).

Officially founded in 1998, MOH has since grown from a small mission located on a barren piece of land, to a fruitful organization that now houses an onsite orphanage, medical facility, school, and church. Through partnerships, MOH also serves outside of its property by helping other orphanages, churches, and schools throughout the country. 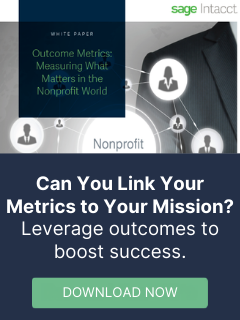 Earlier this year, MOH was approached by the Baptist Haiti Mission

Board and was asked to take responsibility for the stewardship, support, and leadership of Baptist Haiti Mission, in order to see the tremendous legacy begun by Wallace and Eleanor Turnbull continue for the next generation. The Turnbulls began their ministry in the mountains of Haiti in 1943 and have continued to serve faithfully for the past 75 years. BHM serves over 350 churches and 354 primary schools and educational projects serving over 68,000 Haitian children. MOH has agreed to humbly receive the passing of the baton of this great partner in the Gospel.

An Accounting System That Can Scale

"With the addition of Baptist Haiti Mission, we basically doubled in size," says Cory Dahm, Controller at MOH. "There's still work to do to incorporate another organization but it was simple to add them as another entity in our Sage Intacct instance."

Dahm has been the Controller at MOH for nearly 8 years and has overseen a lot of change in the finance department. Before moving to Sage Intacct nonprofit, MOH was using QuickBooks Enterprise. The organization had three separate QuickBooks instances - one in the U.S. and two in Haiti, with one of the Haiti instances in U.S. currency and one in Haitian currency.

"That presented a lot of challenges with consolidations," says Dahm. "We had three charts of accounts that were all different and two currencies in Haiti that were different. When we exchanged from one bank account to another, you would do a transfer in the equity section, but when you reconciled the two, they wouldn't match."

First, the organization switched to just two instances of QuickBooks which was an improvement but still caused issues lining up the charts of accounts. "It was a good first step towards a consolidated financial statement," says Dahm. Matching up charts of accounts and tracking funds was still a challenge and generating timely reports for both U.S. and Haitian operations was a manual process. At that point, Dahm and MOH started to evaluate a move to a more sophisticated accounting system. They evaluated other Sage products as well as Blackbaud's Financial Edge nonprofit accounting software.

"We found other systems were more rigid and we saw Sage Intacct as a more user-friendly, cleaner user interface that seemed intuitive moving from QuickBooks." With Sage Intacct, MOH has one chart of accounts and one group of funds they track using Sage Intacct's Project dimension, keeping everything streamlined with fast consolidations.

"The biggest thing that precipitated us making the switch was the inability with the old system for our Vice Presidents to have access to their expenses and see where they are against budget, in real-time." Having the visibility to know how much of their budget has been spent and where they've spent it takes a lot of the responsibility off of the accounting department. "Now they have all the tools they need to make decisions without having to come to us and wait on reporting. And that frees my team up to accomplish other tasks, like completing training and implementing other tools."

Dahm and the finance team can now provide leadership with key dashboards. They can see all the programs they own with budget versus actuals, and they have a dashboard that shows all their year-to-date expenditures. Below is an example of an executive dashboard that Dahm has created to allow leaders to see their own information rather than having them contact finance and accounting each time they have a question.

The ability to run consolidated financials with the click of a button rather than having to export everything into Excel and combine data from different systems is the biggest benefit of moving to Sage Intacct for MOH so far, according to Dahm. "With bringing on Baptist Haiti Mission, it would be even more of a challenge without a system like Sage Intacct to bring everything together. Pulling consolidated reporting into one place is the end goal and what excites me about continuing to improve things with Sage Intacct."

MOH is an operationally complex organization and has had to respond to disasters such as hurricanes and earthquakes. "We've had multiple hurricanes hit in the last few years and that has meant we were operating with all hands on deck. Last year we went and helped out in Turks and Caicos when Maria and Irma hit." These events both show the importance of the work that MOH does and that the more efficient their processes are and the more efficiently they can run their back-office, the more good they can do.

"The more we can reduce our costs, the more we can help others. Finding ways to be more efficient means we can more quickly provide information to our team that they can use to make decisions. The information needs to be timely and accurate." Sage Intacct continues to help the organization improve in these areas.

Dahm and MOH have embraced the cloud and Sage Intacct's best-in-class approach which allows the organization to choose other best-in-class systems to complement the core accounting system and provide the organization with a total solution to their finance and accounting needs. As an example, in the near future they are looking to implement Nexonia's time, expense, and travel management system, which integrates natively with Sage Intacct.

When asked how he would describe Sage Intacct to other mission organizations with the same challenges, Dahm sums it up well: "Sage Intacct is a fund-based accounting system that is all online with no servers to take care of. You just logon and do what you need to do. But it's still robust enough that it allows us to accomplish our goals and has the ability to grow with us. We can add new modules as well as other products that help fulfill our needs."

AcctTwo will continue to support Mission of Hope: Haiti's growth and the important work they do for the people of Haiti. If you work for a mission organization or nonprofit that would like to explore the benefits of Sage Intacct or AcctTwo's Managed Accounting Services, please contact us today.