A proper succession plan for the back-office is often overlooked, but it gives your business a roadmap of what to do next if your organization loses a leader unexpectedly. During the interim while a permanent replacement is being found, finances may not be well-controlled, projects can lose steam, and the business may see a decline. What are some other succession planning examples that could have prevented chaos?

Don't Plan to Fail by Failing to Plan

Imagine being on the executive team of a growing company and the Chief Financial Officer of your organization abruptly leaves. There’s no transition time. There’s no transfer of information. You are just left behind to pick up the pieces. How many months does that set you behind? How many months does that set the organization behind? It’s a mess and causes undue stress on you, your department, and the health of your organization. A proper succession plan could not have predicted this situation, but it would have given your business a roadmap or what to do next. 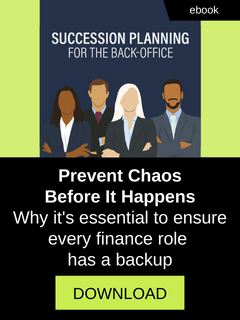 To give an example, we worked with an organization that lost one of their leaders unexpectedly. Their interim replacement stepped in but, was very unprepared for the change and not a good fit in the role. The organization quickly began to decline – managers lost motivation, finances were not well-controlled, projects lost steam, and the organization was in danger of losing funds.

Two years later, they made a complete 180° turnaround and is not just surviving but thriving, but the lack of planning and time spent developing other staff to manage without their former leader caused some deep pains and significant gaps. The organization healed, but not until an extensive and expensive search was undertaken to find the right person to lead the organization through a turnaround. The organization’s failure to plan almost ended in total failure – not just for that position, but for the entire organization.

Succession Planning for the Back-Office

According to Gallup, “While it might be important to activate emergency succession planning for vital C-suite roles, companies must also devote equal attention to ensuring there is a focus on identifying future leaders -- specifically in mission- and operation-critical roles. These leaders will undoubtedly be a significant competitive advantage as you return to regular business. Solely focusing on emergency executive succession planning is shortsighted and not very different than ‘replacement planning.’ But retaining, developing and leveraging future talent is even more important than it was a quarter ago -- this is the time to redraft your succession planning process for maximal results.”

Deloitte reports that while 86 percent of leaders believe leadership succession planning is an “urgent” or “important” priority, only 14 percent believe they do it well. Similar to buying accounting software, succession planning is a function that you only do a handful of times in your career. It is realistic to feel that you don’t do it well if you don’t do it often. We can help. Contact us today.